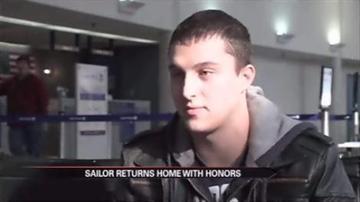 SOUTH BEND, Ind. -- A young Michiana sailor flew into the South Bend Regional Airport Friday, bringing with him a significant honor from the Navy.

Nothing says welcome home like an embrace from friends and family.

"Everybody is so excited, his family and his friends, we all just love Adam,” said Kay Beam, Adam’s mother.

Adam has been onboard the U.S.S. Dwight D Eisenhower for several years now supporting operations in Iraq and Afghanistan.

"It's a lot of work. A lot of time spent in the office or wherever your work-center is,” said Adam.

Adam is an electronics technician.

"The two years prior to going on the boat, I was receiving training to be able to operate one of the nuclear reactor plants that is onboard the carrier,” said Adam.

All of his hard work paid off this year. Out of the thousands of crew members on board the super carrier, he was selected as the Junior Sailor of the Year.

"It was tough competition. Everyone that is nominated for this position has done a lot of great things over the course of the year,” said Adam.

"For an organization like the Navy to recognize his efforts; it's just beyond your wildest dreams,” said Kay.

But the joy of having him home is short lived. Adam will be headed back to sea soon.

"The locations that they go are not safe no matter what branch of the service you're in. Anything can happen,” said Kay. “It's great to have him home; to know that he's okay and to know that he is safe for at least this week."

In about a week, Adam will return to Virginia for duty. He and the crew of the Dwight D Eisenhower are set to head back out to sea sometime in February.