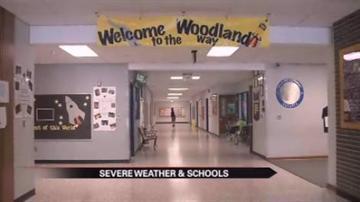 ELKHART, Ind. -- As the images from Moore, Oklahoma show, little can stand up to the force of an EF-5 tornado. Where you are in a building, especially a large building like a school, could mean the difference between life and death.

Two schools were affected by the EF-5 tornado. One of the schools was destroyed and children and teachers had to be pulled from the rubble. Seven children did not make it.

How ready are local schools?

"We're here because we love the kids and the thought of losing a kid is a lot. It's a lot to take,” said Jon Levan, Principal of Woodland Elementary.

"What can we do at Woodland to better prepare for a situation like this. Or what do we have in place that is correct that we maybe need to improve on?” said Levan.

The school's current procedure says all students must go to their safe location, like an interior room, when a tornado warning has been issued.

"The students would be sitting on their knees, covering the backs of their heads facing the wall and that way they are protecting their bodies as much as possible,” said Levan.

Students are spread out throughout the school so no room is overloaded and each child has a space against the wall.

"That way we can ensure that if the roof were to collapse, each child would have a triangle of about 3 feet next to the wall where they would be safe,” said Levan.

As was evident in Moore, location during the storm is key.

"I think the one thing we can learn is that the interior walls of course are the safest place to have the students, lower ceilings, keeping the kids in the best possible location to be safe,” said Levan.

Levan says he sent reminders out to his staff about the procedures Tuesday.

We spoke with a counselor from Oak Lawn about tips for talking to your kids about these events.
She says to keep answers simple and not to answer questions your kids don’t ask.
Minimizing a child's exposure to the images and news of the tornado is also a good idea to ease anxiety.
Share this article: