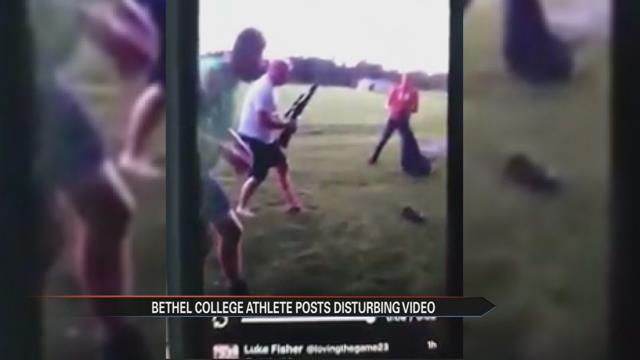 A Bethel College student tweets disturbing video and it has many in Michiana sickened by the content and school representatives say they are taking action.

“It’s a baby raccoon. They threw it like 30 feet in the air and then when it landed it tried to run and while it was running they were beating it with a rifle,” says a parent whose child attends Bethel College.

She did not want to give her name but says the footage made her sick.

“I was so upset to the point of vomiting,” says the parent.

The woman saw the video on her daughter’s Twitter feed Wednesday night and contacted authorities in Fulton County Ohio where the Bethel College student is for the summer.

The tweet has since been taken down but the mother made a copy of the tweeted video.

“Student athletes get away with a lot more than they should and I just don’t think they should,” says the parent.

The Fulton County Sheriff’s Department in Ohio says they began investigating last night and will pass the investigation onto the Ohio Department of Natural Resources.

“I wanted action to be taken to reprimand these young men because if they are capable of that they could be capable of murder,” says the mother.

The school released a statement from the Shawn Holtgren, the Vice President for Student Development.

“We believe that, as Christians, we are called to be stewards of God’s creation. This video is the exact opposite of what we expect from our students. These actions do not represent Bethel’s standards and administrators are in the process of addressing this inappropriate behavior.”