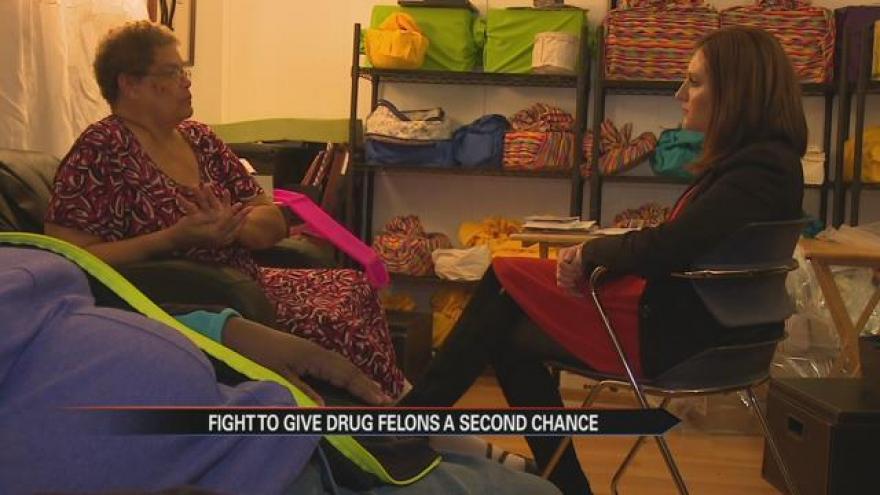 A South Bend woman is challenging a federal law that punishes drug offenders for life. That law bans anyone convicted of a drug crime from ever receiving food stamps, which she says is unfair.

She’ll be bringing that fight to the state senate Monday, asking them to opt out of the ban.

As of 2014, there are almost 500,000 people incarcerated for a drug offense across the country.

Bureau of Justice statistics suggest that in 2014 there were about 15,000 people sitting in Indiana jails for drug-related crimes.

None of these inmates will be able to receive food stamps when they get out, which local advocates say is unacceptable.

“As an addict, and as a felon…Indiana is not forgiving,” says one convicted drug felon.

That’s why she asked to not show her face for the interview.

“I was arrested for dealing in a controlled substance. Crack cocaine--I dealt to take care of kids and to supply my habit,” she said.

Now that she’s out of jail and has kicked her habit, she says she is still being punished for her crime.

“People get out of prison who sold drugs. They can’t feed themselves, and what they’re used to doing, selling dope, to take care of themselves. They realize they shouldn’t do it, but after a while, they say you know what, forget it. I need to eat,” she said.

They can’t eat because of a federal law enacted in 1996 that says anyone convicted of a drug felony can never receive food stamps.

“Indiana is only one of six states that still has that law,” said Cheryl Ashe, an advocate for convicted felons.

Ashe is working to convince Indiana to opt out of that law once and for all. She’s been trying for four years.

“I jokingly tell people I got connected with this bill during the recession. There had been men and women who were working. Their factory closed, right? And they really needed food stamps, but they couldn’t get it, because they had done a drug felony,” said Ashe.

Cheryl emphasized that in Indiana, people can only receive food stamps for three months until they have to prove they’re working at least twenty hours a week or in a work-related program.

“I think that’s the mistake. People think it’s just a giveaway. It’s not. You’re going to work for your food stamps,” she said.

The convicted felon who shared her story says she is ready to work.

“I don’t want to be a drain on society again either. I feel like food stamps is a way to help. It’s a stepping stone, but yet, I was denied that help,” she said.

It costs roughly $2,300 a year to supply food stamps for one person as opposed to the nearly $19,000 a year the Indiana Department of Corrections says it costs to house someone in prison.

Cheryl says she’ll present her case to a select committee of senators Monday.

It’s called Senate Bill 9, and if it passes, all Indiana senators will vote on it.

Check back in on this story for updates on the bill’s progress.