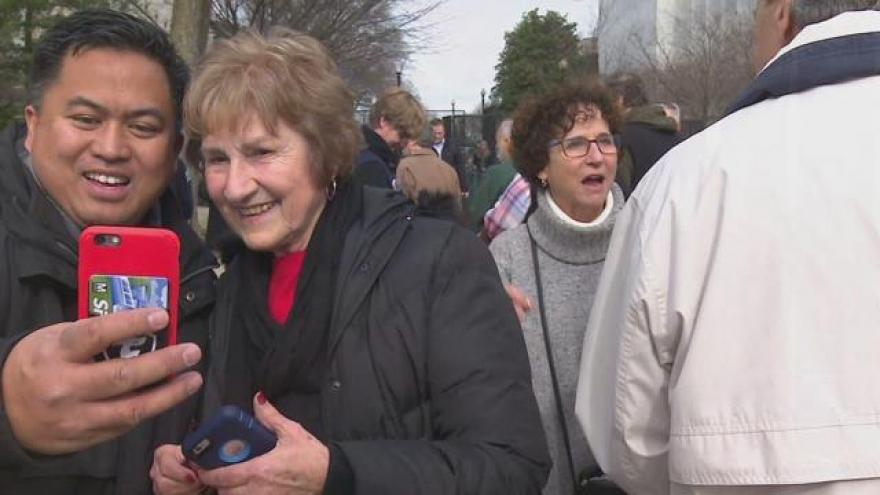 By Taurean Small and Taylor Popielarz

From the Hoosier state to the nation’s capital - that wasn’t just the goal for Vice President Pence. The road to the White House became one for the many Hoosiers that supported his run. Many of them and quite a few Michiganders traveled miles for a snapshot of history in the making.

Quick snaps, selfies, and photos. All moments from the capital to bring home to a proud state.

“To see a good friend become Vice President of the United States, it’s absolutely surreal. That’s really the one word I can give you. It’s a surreal feeling to see Mike Pence become vice president,” said Rudy Yakym, a Hoosier.

Our V.P. just so happens to be one Rudy Yakym’s close friends. Yakym has been on the rise in the Republican Party in St. Joseph County.

Most recently, he’s advised new Indiana Governor Eric Holcomb’s transition in to office. He’s inspired by his friend’s impact and hopes to continue to make his own locally.

“For me, you know, I plan to stay in South Bend and continue on working in commercial real estate,” said Yakym.

Also from the county, a very excited Lynn Fitzpatrick.

“We just are here to celebrate and to support,” said Fitzpatrick.

She’s the latest chair for St. Joseph County republicans. Following a big win for the party, she says it’s time to get to work.

“It is great, but now the work begins. Ok, now we have to deliver on our promises. We have to govern responsibly. We have to balance the budget. So there’s a lot to do,” said Fitzpatrick.

There was a lot to do above the Stateline. Berrien County Clerk Sharon Tyler is full of excitement Friday, but was buried in ballots back in December.

She said the county came together, worked as a team, and proved there was no voter fraud. She and her area are now looking ahead.

“Most of the people in Berrien County, I’d say the majority of them, are very positive, looking forward to the next four years, and hopefully the next eight years,” said Tyler.

A new administration and a new hope for these voters, unanimous on Trump and Pence.

“It’s exciting, I mean, there’s excitement in the air. You can feel it.” “It is exciting! Very exciting!”