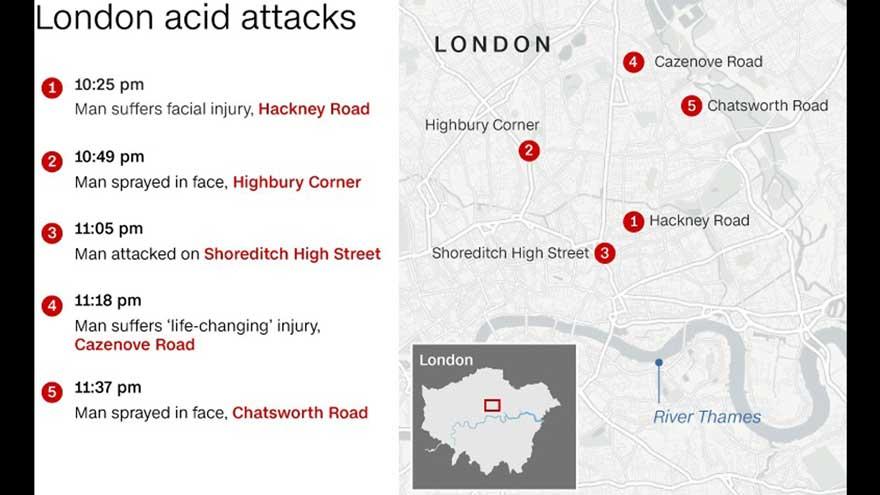 LONDON (CNN) -- Five men were attacked with acid in London, with one man suffering life-changing facial injuries in what police on Friday were treating as linked assaults.

The five attacks on Thursday night, which were reported to police over a 70-minute period, are the latest in a spike of incidents using corrosive liquids as weapons in robberies and gang-related violence in the British capital.

Police said at least four of the five attacks involved two males on a moped, and in at least two cases the attackers stole mopeds belonging to their victims. Another incident involved a robbery.

A 16-year-old boy was arrested on suspicion of grievous bodily harm and robbery, and is currently in custody at an east London police station. A 15-year-old boy was later taken into custody on the same allegations, according to police, who appealed for witnesses to come forward.

Four of the attacks happened in the eastern borough of Hackney, and one other in Islington, in the city's north. All five victims were taken to hospital.

Attacks are on the rise

Acid attacks in London are largely concentrated in the city's east.

London's police chief, Cressida Dick, said police were concerned by the spike in acid attacks, which she called "completely barbaric."

"We will arrest people. We will enforce the law as we can. We are working very closely with the Home Office to try to see whether there's any changes in the law required," she told LBC Radio.

Sarah Newton, an official from the Home Office, told the BBC that tighter restrictions on acids and tougher penalties for their misuse were being discussed.

"I and my colleagues in the Home Office have been increasingly concerned about the escalation of instances -- especially in London. So, we've been working with the Metropolitan Police and community policing some months now," she said.

Parliament is due to debate the issue on Monday next week at the request of MP Stephen Timms from the main opposition Labour Party.

"Too many people are frightened of becoming a victim. Ministers need to act," said Timms in a statement before Thursday assaults.

Corrosive acids are still quite easy to purchase from local, everyday stores around the UK.

Acid was in the past more commonly used in personal disputes, often perpetrated by men against their female partners. Several other recent acid attacks in London have appeared to be racially motivated.

Following an attack in June on 21-year-old aspiring model Resham Khan and her cousin Jameel Muhktar, a petition on Change.org demanding that the UK Parliament require individuals purchasing acid to hold a special license now has almost 370,000 signatures.