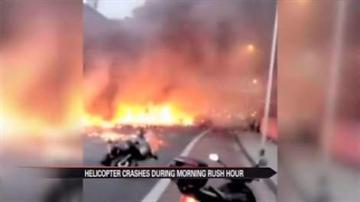 LONDON — A helicopter crash in central London during rush hour has claimed at least two lives and injured nine other people.

Police said it appears that the helicopter hit a crane and sent debris crashing onto at least two cars below.

Firefighters were able to quickly extinguish the flames.