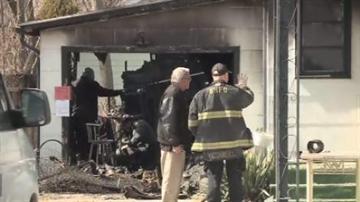 BERRIEN COUNTY, Mich. -- A Benton Harbor firefighter was injured while responding to a fire on Jennings Avenue. He responded to the fire with the help of two public safety officers because he was the only firefighter on duty at the time.

Benton Harbor’s financial problems left only one person on duty at the time of the fire.

Lieutenant Doug Bell responded to the fire on Jennings Avenue by himself.

He got trapped inside the burning home around 1 a.m. and was rescued thanks to the daring efforts of his fellow officers.

He was transported to the Bronson Hospital Burn Unit in Kalamazoo for severe burns to his hands, fingers, back, ears, forehead and neck.

He is listed in fair condition.

The Director of Public Safety, Roger Lange, says even if there were twenty firefighters on duty at all times, there would still be incidents like this one.

Bell was assisted at the scene by two public safety officers who are cross trained in both police and fire.

"They respond to these calls all the time. This time unfortunately one of our firefighters-one of our seasoned, dedicated and committed firefighters ended up being injured,” said Lange.

Some say this is proof the public safety officer concept doesn’t work.

The cause of the fire has not been released.