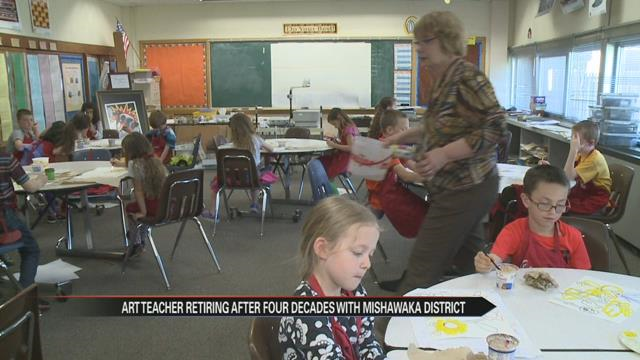 It has been said that a great teacher takes a hand, opens a mind, and touches a heart. One Michiana teacher has left her mark on students for more than four decades.

Kathy Molnar started teaching in 1975 at Emmons Elementary School in Mishawaka. Throughout the years, she has rotated among schools in the School City of Mishawaka district.

She has taught thousands of students. Some have gone on to become doctors, police officers, and some have followed in her footsteps and become teachers.

“I remember us doing a picture with symmetry and we had to cut our face in half and then draw the other half. I actually have done similar activities with my own class,” said Dalona Daggy.

Daggy had Mrs. Molnar as a teacher when she was in grade school. Now as a 4th grade teacher, she has used some of the things Mrs. Molnar did in class in her own classroom.

“I appreciate the things she shared with me so I can share them,” Daggy added.

Molnar said the years have gone by so fast. “I just knew that I enjoyed doing what I was doing with the kids,” said Kathy Molnar.

After 41 years of service to education, she said it is time for a new chapter. “I have two grandchildren who I would like to do things with and I would like to travel with my husband," Molnar added.