Look out for fake tickets in Indianapolis 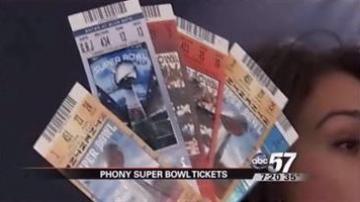 INDIANAPOLIS, Ind.—The Super Bowl excitement is in high gear in Indianapolis, and so is the scamming.

Police have been working on shutting down phony ticket operations along the East Coast, but the fake tickets are now popping up in Indianapolis.

Authentic Super Bowl tickets feature several security features; including a hologram of Lucas Oil Stadium, and a raised picture of The Lombardi Trophy on the front.

Unfortunately, for those who end up with the fake tickets, the N.F.L. says there is nothing it can do to help.

Anastasia Danjas with the N.F.L. said, "We wish we could help every single fan who gets duped, whether or not they get their tickets lost or stolen or get duped by counterfeits. What we try to do is help out fans to the extent that there are tickets in reserve."

Fake merchandise is also turning up both on the streets and online.

Federal Agents have shut down more than 300 websites selling phony gear over the last four months.