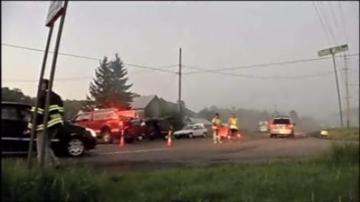 TRUXTON, N.Y. -- Seven people died when a trailer became unhitched and slammed into a van on a highway in upstate New York.

The trailer was full of cars.

The trailer slammed into the van killing seven. One person survived.

"The trailer became unhitched from the tractor.  It struck the mini-van and we have multiple fatalities. In the 13 years I've worked at the sheriff's office on the accident investigation team, I've never seen an accident along these lines," said Lieutenant Robert Derksen, Cortland County Sheriff's Department.

The truck driver was not injured.