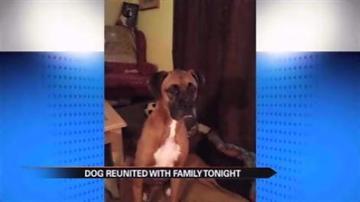 MISHAWAKA, Ind. -- A New Jersey dog was found wandering the streets of South Bend, but it wasn’t homeless for long. The microchip implanted in the dog led the Humane Society to the dog’s owner several states away.

According to the dog’s owner, James Dye, he gave his beloved dog, Duke, to his brother while preparing for a move.

The brother gave Duke away, but didn’t tell Dye.

Then, the people who took in Duke neglected him so badly he ran away.

Lost, alone and wandering the streets of South Bend, the Humane Society picked up the dog and helped reunite Duke with Dye thanks to his microchip.

"If he wasn't microchipped we would have never known from the shelter what happened,” said Dye.

Just last week, Duke was behind the glass inside the Humane Society shelter like all the other lost dogs.

Duke, the boxer from New Jersey, was found roaming through Mishawaka.

The normally 75 pound boxer had dropped to only 35 pounds.

"Since he's been home you can't see anything but slightly some ribs, but that's what you're supposed to see for boxer anyway, my wife has put a lot of weight on him,” said Dye.

The Humane Society says only about one out of six dogs in the shelter are microchipped.

That's not as many as they'd like to see.

"Last year we did over 500 return to owners where pets came in and we were able to find their owners but not all of those had microchips. There were actually very few of those animals that did have microchips,” said Genny Carlson, Outreach Coordinator of the Humane Society.

Carlson says the numbers of animals happily reunited with their owners would be a lot higher if all animals were microchipped.

Dye says that chip saved him a lot of heartache.

"It's a quick procedure, it's very easy for the vet to do. It doesn't cost a lot of money,” said Dye.

It will only cost you $25 for the microchip and to register your animal in the system.

The next clinic is Saturday May 11th at the Humane Society on Grape Road in Mishawaka from noon until 3 p.m.