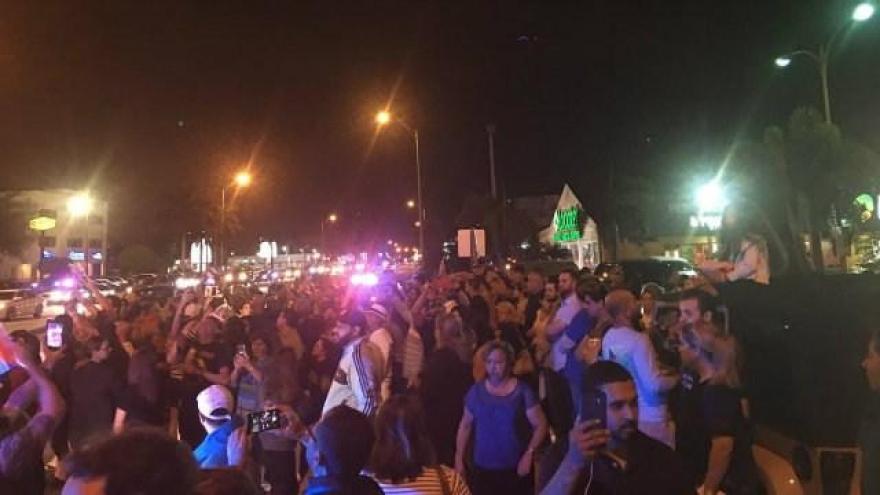 HAVANA, Cuba (CNN) -- The death of Fidel Castro triggered both celebration and mourning, as critics welcomed his passing while supporters grieved for the polarizing strongman who dominated Cuba for decades.

Castro died at the age of 90 as announced on the country's state news Friday overnight.

His brother, Raul Castro in a televised statement announced his death. "Dear people of Cuba, with profound pain, I have to sadly inform you ... that today, November 25, 2016, at 10:29 in the evening, the Cuban Revolution Fidel Castro Ruz died."

Details about his funeral and tributes would be revealed by an organizing committee, he said.

The death of a revolutionary icon in the past has prompted state-sponsored mourning in Cuba. In previous mourning periods, restaurants and bars have been shut, and singing and celebrations are prohibited, CNN's Patrick Oppmann reported from Havana.

After the news of his death, much of Havana remained silent.

Meanwhile across the sea, revelers spilled into the streets of Miami, Florida, the center of the Cuban exile community. They popped champagnes, clanged pots, cheered and waved the Cuban flag in jubilation. They stood outside the popular Versailles restaurant in Little Havana neighborhood with signs reading, "Satan, Fidel is now yours."

"This is a celebration, but not a celebration of death, but a beginning of liberty that we've been waiting for many years. The hope is ... that it opens up Cuba a little bit more," a Cuban-American man who was celebrating in Miami.

"It means a lot for us Cubans," one of the revelers told CNN affiliate WSVN. "It's a moment that we've been waiting for 55 years. We're free at last. The man that caused so much suffering, so much people to be sad in my country ... has passed away."

Castro reigned in Havana for nearly five decades with an iron hand, defying a US economic embargo intended to dislodge him.

But he lived long enough to see a historic thaw in relations between Cuba and the United States. The two nations re-established diplomatic relations in July 2015 and President Barack Obama visited the island earlier this year.

In ways, he became a romanticized figure and a legendary survivor, besting what Cuban officials say were more than 600 attempts to kill him. Castro had marveled that he lived to turn 90, during a rare public appearance in April.

"Soon I will turn 90 years old, never would such a thing have occurred to me and it's not the outcome of any effort; it was fate's whim," Castro said this spring, discussing his health, usually a taboo subject on the island. "Soon I will be like everyone else. To all of us comes our turn."

Castro had many admirers, who saw him as a stalwart with his ubiquitous military fatigues and fiery oratory. Castro clung to a socialist economic model and one-party Communist rule, even after the Soviet Union disintegrated and most of the rest of the world concluded that state socialism was a bankrupt idea whose time had come and gone.

Castro's political party, the Cuban Communist Party mourned for "the commander of the Cuban Revolution" with the hashtag #UntilVictoryAlwaysFidel.

Mexico's president Enrique Peña Nieto called Castro a friend of Mexico, who had promoted bilateral relationships based on "respect, dialogue and solidarity."

Pakistani politician, Imran Khan hailed Castro as "an iconic revolutionary leader" who stood against the US.

India's Prime Minister Narendra Modi said he was "one of the most iconic personalities of the 20th century. India mourns the loss of a great friend."

But others viewed Castro as an enemy of human rights, who suppressed and imprisoned dissidents.

"I am shedding tears tonight, but they're tears of joy," said Armando Salguero, a Miami Herald columnist. "Hell has a special place for Fidel Castro and there's one less vacancy in hell tonight."

He said many Cubans were cheering, because they had been forced to come to the US because they couldn't have the freedoms and ways to make a life in their homeland.

U.S. Representative Ileana Ros-Lehtinen, who represents South Florida, tweeted "Tyrant + thug Fidel Castro is dead," and said his death was an opportunity to have a more free and democratic Cuba.

CNN's Patrick Oppman reported from Havana and Madison Park wrote from US. CNN's Julia Jones contributed to this report.