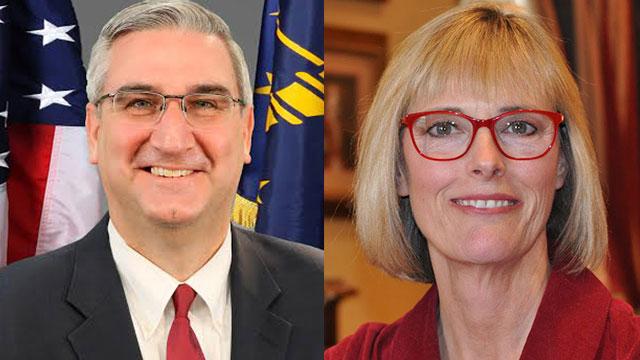 Lieutenant Governor Eric Holcomb, the Republican nominee for Governor, announced who has chosen as his running mate for the November election.

Holcomb announced he has chosen Suzanne Crouch as his Lieutenant Governor. She is currently the State Auditor and previously served as state representative, county commissioner and county auditor.

Holcomb released the following statement in the press release:

Our State Auditor, Suzanne Crouch, brings to our ticket a strong record, an impressive resume and valuable experience in four separate and important roles in local and state government, at both the legislative and executive levels,” said Lt. Governor Holcomb. “She is full of energy and passion and is a natural at barnstorming the state. She is a relentless campaigner, a great fundraiser and will be the perfect governing partner if we are honored to serve as Governor and Lt. Governor.

I know that working together, Suzanne and I will not only continue Indiana’s growth, but we will take the state we love to the next level. We will make Indiana the best state to live, work, play and stay.

Currently serving as Indiana’s 56th Auditor of State, Suzanne Crouch has extensive experience in local and state government having previously served as a State Representative for Vanderburgh and Warrick Counties, a Vanderburgh County Commissioner and as Vanderburgh County Auditor. At every level, and in every role, she has been a conservative leader and responsible steward of taxpayer dollars.

As Auditor of State, she is the Chief Financial Officer for the State of Indiana. Her office accounts for Indiana’s $31 billion biennium budget and pays state employees and vendors. This role is critical to Indiana’s economic climate and growth because the timely payment of bills is a major factor for the credit rating agencies in assessing our state’s credit. In fact, Indiana’s AAA credit rating has helped lead businesses operating in Indiana to expand and out-of-state businesses to relocate here. The Auditor of State’s office also serves as the State of Indiana’s customer service window to County and City governments.

During her time as a State Representative, Suzanne served as Vice-Chairman of the House Ways and Means Committee where she helped craft a structurally balanced budget and the largest state tax cut in Indiana history.

Suzanne was born in Evansville, Indiana. She graduated from Purdue University and, four years after college, met her husband Larry Downs. Together they have a grown daughter, Courtney.