Made in Michiana: Brimar Wood 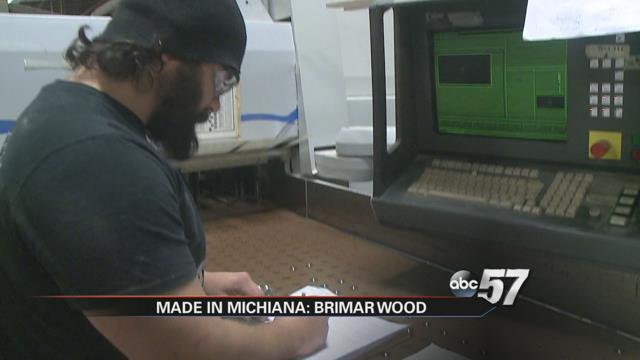 ABC 57's Made in Michiana series continues at Brimar Wood in Goshen. That's where two men, born and raised in Goshen, have worked to grow their custom furniture start-up into a thriving business.

It all started with less than two-thousand square feet of working space.

“I don’t think neither Mark or I thought it would go this fast,” Roe said.

“I like the growth. I like the ptoential that we have. I like being able to offer jobs to all of these families, the employees that we have. So it’s stressful but it’s well worth it," Brimar Wood co-owner and Vice President of Operations Mark Wert said.

“Seeing the first facility we moved to with 10,000 square feet, and him taking a deep breath and saying we’re never going to fill this with product,” Roe said.

But six months later, they did. Things really took off in 2009. And their join business endeavor is still growing today.

“The demand is always there. Everybody in the commercial market, they’re the companies that are upgrading, changing out their office spaces, so that helps the need always be there for what we do,” Wert said.

“We’re a custom shop, so anything a customer or designer brings to us, we let our engineering crew go at it and come up with a solution for them,” Roe said.

Wert credits a strict process for a uniform and quality product. He says it starts with A-grade materials.

“We still use glue joints, our jointery makes it, our sanding makes it, every step of the way we follow a quality regiment that assures that the product is good at the end,” Wert said.

It's a product that's been shipped to offices from the West Coast to the East Coast. And for some high-profile people, too.

“Recently we did a desk for P. Diddy, Sean Combs. We did a reception desk for him that was custom designed in New York City. It was all white and glass so it came out really nice,” Roe said.

The rap mogul's desk joins a long list of celebrity clients, including the Screen Actors Guild in New York, Legendary Pictures in Hollywood, along with some major universities across the country.

“The desk we did for Screen Actors Guild was unique angles, unique materials,” Roe said.

But for Brian and Mark, all of that notoriety in the custom design world isn't how they measure their success.

“As our company has grown, and we entertain with the families, our employees, that’s what’s really important. It’s the family environment, it’s getting to know these people and I’ve found that to be the reward,” Wert said.

It's the local people they employ, who have helped this Made in Michiana business prosper, making all of the sacrifices worthwhile.

The ABC 57 morning crew heads ot Polywood in Syracuse next. If you know of any local businesses you would like to see featured in our Made in Michiana series, let us know at News57@abc57.com.