Made in Michiana: YouTheFan 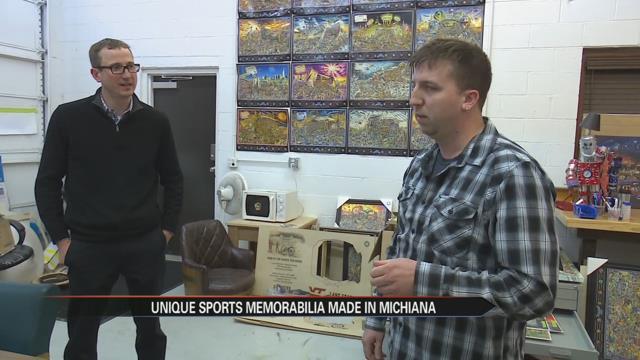 Made in Michiana returns this week. And this time, ABC 57 is taking you to Warsaw.

That's where one company is winning over sports fans one unique piece of memorabilia at a time.

YouTheFan, formerly known as IDNA Brands, has been working to make sports fans, its fans, since 2009.

“The idea was why can’t we make something?” YouTheFan President David Bazzoni said.

Bazzoni was selling corporate apparel and promotional items at the time. One of his biggest customers was the University of Notre Dame.

“Notre Dame says can you think of something new and different for our NBC executives as like a gift basket? Yeah, sure no problem. Go through all of the catalogues, flip, flip, flip. And there’s just nothing in there," Bazzoni said.

So, he brainstormed something new.  The Sportula is a simple concept.

“Here’s our logo, here’s a bottle opener at the end, and it’s just a really fun gift idea, and we’ve sold millions of these,” Bazzoni said.

And it launched his one idea, into a full-fledged business venture. From there, things really took off. Bazzoni's next idea hit him at an Ohio State football game.

“I’m a big Huskers fan and it was not a good game.  I think it was 63-28. And you’re thinking about anything but the game. And so the idea was this, this is the Stadium View original prototype,” Bazzoni said.

Timing was everything. Not long after, he reconnected with an old friend from grade school, who had grown up to be a talented artist.

“It’s been a lot of trial and error at times,” YouTheFan Lead Artist Jed Bruce said.

Finally, Bazzoni came up with a search and find concept, Joe Journeyman. It's a book that would unleash Bruce's full potential.

“Sometimes during the process, if it doesn’t feel like a complete failure, it doesn’t turn out as good,” Bruce said.

It's like a Where's Waldo book, but with Bazzoni's character Joe Journeyman, a legendary football player who played for all 32 teams in the NFL.

“On a few of them, we’ve known for sure we want to put Joe here doing this, just because it sort of ties in with the theme of the piece, but most of the time I just put him in wherever he fits in as we go,” Bruce said.

When you look around Bazzoni's headquarters, it seems like he's hit the jackpot. But he says hatching his big plan was never easy.

“Phase 4 which is something I always like to point out, this is basically go back and get everybody that said no. And that included Notre Dame, that included the NFL four times, and so there was a tremendous amount of no in this plan,” Bazzoni said.

It turns out that "no" may have been one of the best things to happen to him. Just one year later, his persistence paid off. And Bazzoni says he doesn't plan to let off the gas pedal any time soon.

“I don’t think we’ve taken off yet, but we’re young, dumb and stupid enough to think that we can be the very best in the world at what we do. We don’t want to do a lot of products, we just want to do a few, really, really well,” Bazzoni said.