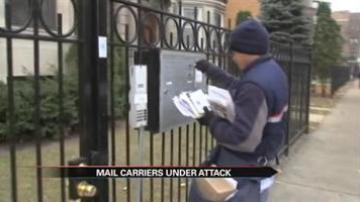 CHICAGO -- A flag that flies outside the Letter Carrier Union Hall in Chicago is at half staff after a postal worker in Maryland was gunned down on the job. Now, other letter carriers are afraid to do their jobs.

One delivery man is recovering from a broken jaw after he was attacked by two armed men.

The National Association of Letter Carriers says several recent attacks have them worried, especially ahead of the busy holiday season.

"It was a rainy day, I had somebody come from behind and punched me in the jaw," said letter carrier Leslie Barrett.