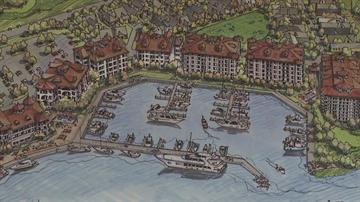 BENTON HARBOR, Mich. – Harbor Shores Golf Club seems to be the gift that keeps on giving.

The project, Harbor Village, will include condos, a new marina and a hotel.

“This is probably the signature piece in the entire development,” said Ron Schults investor and developer of Harbor Village.

The site sits near off Witwam Drive where the St. Joseph and Paw Paw rivers converge. It was once a Whirlpool industrial site that left in the 1980s.

When complete the complex will include a 105-slip marina, 70-room boutique hotel, and 150-200 condominiums and cottages. The draw will be both the river and golf course.

"We have been hoping and expecting something like this to happen for several years now," said Wendy Dant-Chesser with Cornerstone Alliance. The project has been talked about since before the course was built and real estate markets are finally rebounding.

Chesser said one of the most important things about the project is making the area more attractive to other businesses. "We have something to sell so this enhances that foundation and that quality of place," she said.

The marina is scheduled to be complete in the fall of 2012 and the hotel by spring of 2014.