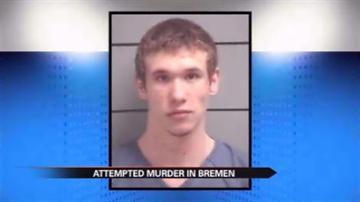 BREMEN, Ind. -- A man is accused of multiple crimes against his ex-girlfriend, including attempted murder, strangulation and kidnapping.

It started on South Washington Street around 10:30 Wednesday morning.

According to what the ex-girlfriend told police, Anglemyer found her hiding in her room. He threatened to kill her with a large screwdriver if she didn’t do as she was told.

He forced her to run several blocks to an apartment complex where his cousin lived.

Along the way he allegedly struck her in the head repeatedly with the handle of the screwdriver.

According to the cousin, she let Anglemyer inside because he said the victim had fallen and hit her head and needed to clean herself up.

Inside the bathroom, his ex-girlfriend claims Anglemyer beat her some more, then shaved her head with an electric razor.

Then she says he wrapped the cord around her neck and strangled her with it until she lost consciousness.

According to court documents, when police arrived Anglemyer opened the bathroom door and told them his ex-girlfriend was dead.

They tackled him and checked the girl who appeared to be lifeless.

When they unwrapped the cord from around her neck she started breathing again.

Bremen’s Police Chief Matthew Hassel helped take Anglemyer down at the apartment. He says this incident has shocked to the community.

"We are a small, close knit, quiet community that doesn't experience criminal activity such as this. This is my 29th year on the department; we've had one homicide since I've been on the department,” said Hassel.

The chief couldn't give us any comments on the specific crimes in which Anglemyer is suspected.