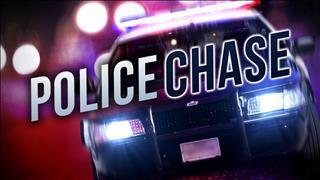 Deputies with the Van Buren County Sheriff’s Office arrested a man after he led them on a brief chase.

Deputies attempted to stop a Chevy Silverado after the driver failed to stop at a stop sign.

The incident happened in the city of Gobles just north of Paw Paw, Michigan.

Deputies say when they tried to pull over the driver on State Street, the truck sped up and reached speeds in excess of 70 mph.

The 34-year-old driver from Allegan crossed the center line into the northbound lane causing an oncoming vehicle to drive off the road to avoid a collision.

The suspect eventually stopped in the Village Market parking lot, but refused to exit his truck when deputies ordered him to, according to deputies.

After removing the suspect from his vehicle, deputies say they found two open cans of beer and a nearly empty bottle of whiskey.

Officials say the driver had a suspended license and three prior drunk driving arrests in the past year which he is currently on probation for.

He was taken to the Van Buren County Jail on OWI 3rd, attempted fleeing and eluding, DWLS 2nd, resisting arrest, open intox in a motor vehicle and operating without vehicle insurance.