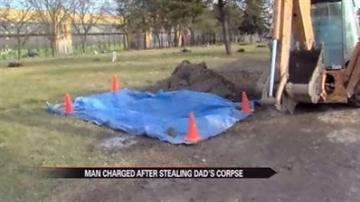 DETROIT -- The man who took his father's corpse from a Detroit cemetery was in court Friday after police charged him with theft.

48-year-old Vincent Bright has been charged with disinterment of a body. Bright was arrested earlier this week along with another man after police found an empty casket  in his van.

Police say the son took his father's body hoping it would be miraculously resurrected.