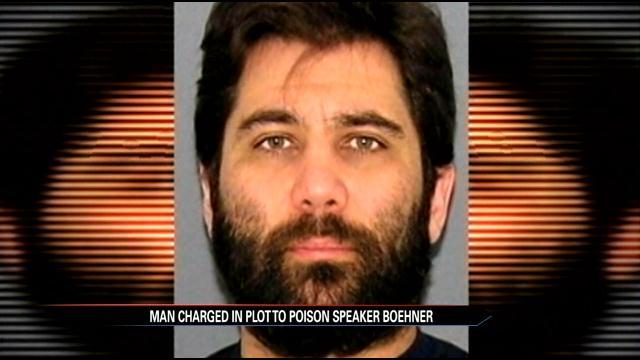 An Ohio bartender with a history of mental illness is behind bars and is charged with plotting to kill House Speaker John Boehner.

According to investigators, 44-year-old Michael Hoyt worked at Boehner's Ohio country club and admitted he had planned to mix the congressman a deadly cocktail

On Wednesday, House Speaker John Boehner took to the House floor with no comment about Hoyt.

Police claim Hoyt worked at the country club for five and a half years.

According to court documents, Hoyt was dismissed from his job in October, and police responded to a 911 call to his home where Hoyt said he blamed Boehner for his being fired.

He reportedly claimed to be Jesus Christ and said the Speaker was the Devil.

Police claim Hoyt admitted he had a loaded assault rifle he planned to use to shoot the Republican leader, adding that he'd also considered poisoning Boehner “because Boehner was mean to him at the country club.”

The day before his arrest, investigators claim Hoyt sent an e-mail to Boehner's wife that read in part, “If I had any intention of hurting Mr. Boehner, I could have poisoned his wine…many, many times.”

Boehner told the FBI he remembered Hoyt, but did not recall any confrontations with him.

His spokesman released a statement, saying, “Speaker Boehner is aware of this situation, and sincerely thanks the FBI, the Capitol Police, and local authorities in Ohio for their efforts.”

Currently, Hoyt is in custody and is undergoing psychiatric evaluations.

He has been charged in threatening to kill the Speaker of the House, and if convicted, he could face up to 30 years in prison.