Man charged in shooting death due in court 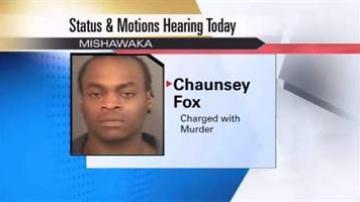 SOUTH BEND, Ind. – One man is due in court Thursday for both a status and motions hearing.

Chaunsey Fox, 22, is accused in the shooting death of Eddie Williams on South Jackson Street. It happened back in March of 2009.

According to court documents, Williams was found dead in a backyard beside his car, which was still running.