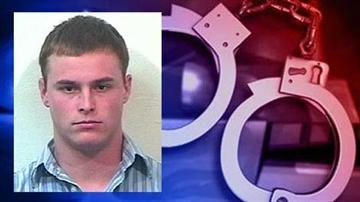 The Van Buren County Sheriff's Department says on October 18, 2013, Kearns was dropped off at a hospital and staff were told he fell down a flight of stairs.

Kearns died from his injuries and the Medical Examiner's Office in Kalamazoo determined the injuries were inconsistent with a fall down the stairs and contacted the Van Buren County Sheriff's Department because it was believed the incident happened in Van Buren.

Detectives learned Kearns' injuries may have happened while he and a friend were attempting to steal street signs.

Detectives spoke with 24-year-old Seth Jones who allegedly admitted Kearns was on his vehicle's roof while trying to steal street signs. Jones told detectives that Kearns fell and struck his head on the round as they went around a bend in the road.

The information was forwarded to the prosecutor's office and a 3 count felony warrant against Jones.

Jones turned himself into the sheriff's office and was arraigned and posted bond.

Jones faces one count of reckless or negligent driving causing death, failing to report a personal injury or fatal traffic crash and one count of operating a vehicle without insurance or security.