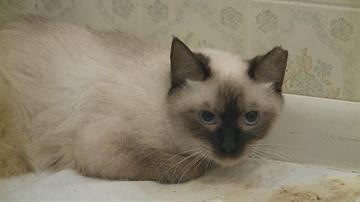 SOUTH BEND, Ind. – A South Bend man is facing up to three-years in prison for shooting and paralyzing a cat on the city’s south side.

Ronald Snyder, 51, was found guilty of mutilating an animal by a jury on March 20.  According to witnesses, Snyder shot a cat with a pellet gun on September 16, 2011 in an alley behind the 1100-block of East Donald Street.  A neighbor who cared for the cat found it and took it to a vet who found a pellet lodged in the cat’s spine.

The cat, named Emily, is one of a number of feral cats in the neighborhood that has been fed and cared for by another resident near Donald Street.  Emily underwent surgery immediately after the shooting and, despite fighting bad infections, is still recovering.  The cat is still partially paralyzed; she can’t move her bag legs.

The woman who cares for Emily asked not to be named but briefly described the September 16 incident.  She and two neighbors had been talking in the alley and saw Snyder step out of his backyard, raise a gun and fire it.  Later, the woman found Emily lying on the ground unable to move.  Since the incident Emily has been living in the woman’s home and is being cared for.  The cat is being heavily medicated and still has scars and sores from the shooting and the surgery.  It is hoped that eventually the cat may be able to walk on its back legs again.

Snyder faces a possible jail sentence for six-months to three-years and a fine of up to $10,000.  He will be sentenced on May 2.