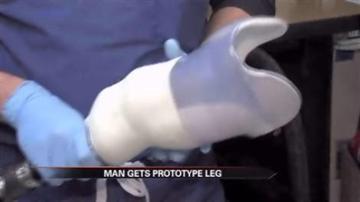 ZIONSVILLE, Ind. -- A man who lost his leg in 1967 when he was teenager is now able to run on his own after 40 years thanks to an innovative prosthetic made in Zionsville.

64-year-old Dave Rusie was 19 when he lost his leg in a crash. A drunk driver hit him on a motorcycle.

Since then, Rusie has had a dozen different prosthetics, but nothing that worked quite right.

That was until he visited the Indiana Institute for Prosthetics. Now he can run and hopefully play golf.

"There's a pivot in there. That's what hopefully will improve my golf game," said Rusie.  "II haven't played golf this well for 40 years. I quit playing for a long time, so it's really been a blessing."

The prosthetic he is using is a prototype.