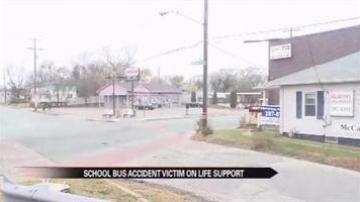 SOUTH BEND, Ind. -- It has been more than two weeks since 59-year-old Kenny Reynolds was hit by a school bus and the victim is still in the Intensive Care Unit at the hospital.

A friend who did not want to go on camera said Reynolds’ organs are shutting down and his family is debating whether or not to take him off life support. However shortly after our 6pm newscast Kelly Reynolds, Kenny's daughter, called and wanted to clear the air about the situation. She told ABC 57 News her father is still in the ICU in critical condition, but she said her father's organs are not failing and they will not be taking him off life support, because she said, "he is not currently on life support."

Kelly tells ABC 57 that her father is not conscious and has assistance breathing with a ventilator and his condition is day to day. She believes the incorrect information about him being on life support was passed from family members that are, "not in the know" and they passed the information on to some of her father's close friends.

A handful of Reynolds' former high school classmates stopped by while our ABC 57 crew was near the intersection where the accident happened. They were reminiscing about their time playing ball with Kenny.

His daughter Kelly tells us her father was quite the basketball player while at Riley High School in the early 70's. She said he went on to play college ball at East Tennessee State University.

Sergeant Bill Krause of the South Bend Police Department is heading up the investigation into the crash that happened at Elwood and Portage Avenue on Monday November 12th.

"Initially it appeared to be very minor when I was contacted. He was conscious, alert, talking to everybody at the scene,” said Krause.

After he was taken by ambulance to the ER at Memorial Hospital, medical staff members say 59-year-old Kenny Reynolds took a turn for the worse.

For the past 15 days he has been unresponsive in the ICU.

The initial report shows Reynolds had the right of way as he crossed the street at the crosswalk heading north.

The 47-year-old South Bend school bus driver was checked off on the paperwork for failure to yield. Reports say she turned west on to Elwood from Portage and hit Reynolds.

"There is nothing to indicate any alcohol part on her part,” said Krause.

The school corporation says the bus driver will remain on paid administrative leave until the outcome of this investigation is complete.

"Sometimes people look like they are critical and they may not make it and they walk out of the hospital that day. Other people you think are very minor end up with injuries you can't see from the outside,” said Krause.

Krause is asking anyone who may have seen the accident on November 12th to contact him.