Man hit by train going 110 mph is alive and responsive 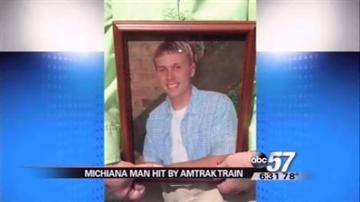 Jacob See underwent surgery at Memorial Hospital in South Bend to put a plate in his neck.

According to his grandmother, Helen Hugley, he had several crushed vertebrae.

See was walking along the train tracks when an AMTRAK train hit him going 110 miles per hour.

Hugley said, “I would definitely call it a miracle. I couldn’t believe it when they told us he was alive and talking.”

Around 11:40 AM on Friday, See left Shady Oak trailer park to go on a jog along the Michiana shoreline.

That’s when Hugley’s daughter called her asking if she knew why so many police were across the street.

Hugley said, “She goes, I’ll call you back mom I’m going to call him. And she called him and he didn’t pick up so she turned around and came back and we ran over there.”

She said she couldn’t believe he was responding to commands from police.

Hugley said, “He says he doesn’t remember anything. He said he didn’t even remember being on the tracks let alone getting hit.”

The impact sent See feet away from the tracks.

He was rushed to St. Anthony’s Hospital then taken by helicopter to Memorial in South Bend.