Man in jail after allegedly trying to extort $250,000 from Paula Deen 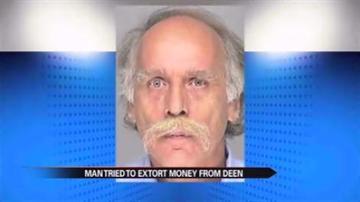 The man, 62-year-old Thomas Paculis, is accused of emailing and calling Deen's lawyer and demanding money in exchange for keeping quiet about statements that Deen made.

The main said the statements would bring financial ruin to Deen if released.

The federal charge was filed June 24, several days after she released a video apologizing for using a racial slur.