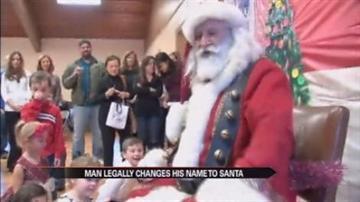 COPIAGUE, N.Y. -- The demographic of people who change their names are usually rock stars and many women who get married, but one man in Long Island loves Christmas so much and looks like Jolly ol' Saint Nick that he legally changed his name to "Santa Claus."

Many might be wondering why he did such a thing but in Santa's mind, it's very simple.

"There are so many problems in the world today I want everyone to be happy even if its just for a moment I want to make you remember what its like to be a child," said Claus.

He said he also did it because people have been telling him he looks like Santa his whole life and one of his sons was born on Christmas Day.