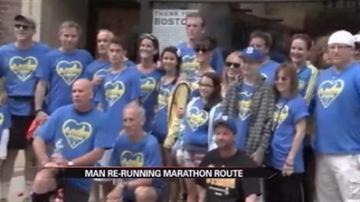 BOSTON -- One man who never got to finish the Boston Marathon decided to run it again.

Bill McCabe was in the middle of his race when the bombs went off just a month ago and never crossed the finish line.

This weekend, he ran the marathon route all over again to help raise money for the victims of the deadly attack.

"When I went to pick up my medal all of the bags left by the marathoners were there and I was by myself and they put a medal around my neck. It was such an eerie feeling," said McCabe.

He said running a marathon is nothing compared to what the survivors have gone through.

McCabe said since he was not hurt in the attack, he wants to help those who were.