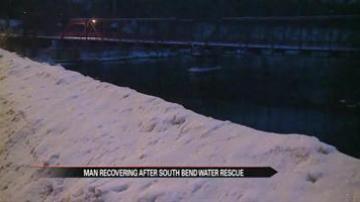 SOUTH BEND, Ind.--  Several tips to the Department of Natural Resources have helped identify the man who fell from the Darden Street bridge into the St. Joseph River.

It took the river rescue team about 10 minutes to get the man, identified as 57-year-old Stephen Rodick, out of the icy water after he fell shortly after 6:30 Monday evening.

“It’s not traumatic, just really weird," said witness David Jaramillo. "I mean, I was driving by and saw an individual go over the ledge.”

Jaramillo also mentioned how his Marine training came in handy as he remembered to not take his eyes off the man in order to better direct first responders to his location.

“When we drove by he was literally swimming, and I don’t think that’s right,” said Casey Kurdys, another eyewitness. “He almost looked like he was diving underwater, then all of a sudden, he just kind of stopped.”

“He was pretty close to the shore so they jumped in and got him out, and hauled him up the hill," said Teklar.

First responders gave the man CPR on scene and immediately rushed him to the hospital.

Indiana Conservation Officer Jonathon Boyd said it only takes a few seconds to get hypothermia in the frigid river.

“We’re making sure no one pushed him off the bridge, or that nobody slipped and fell because of ice, or whether it was intentional or some type of mental issue, we don’t know,” said Boyd.