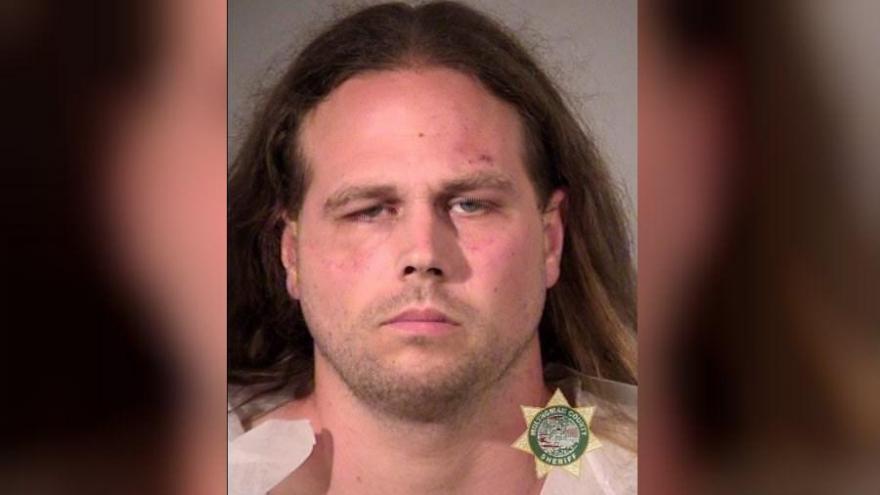 (CNN) -- A man fatally stabbed two people and wounded a third on a commuter train in Oregon's largest city Friday as people confronted him for "yelling a gamut of anti-Muslim and anti-everything slurs," a Portland police spokesman said.

Jeremy Joseph Christian, 35, was on a Metropolitan Area Express (MAX) light-rail train in Portland late Friday afternoon when he started yelling what "would best be characterized as hate speech toward a variety of ethnicities and religions," police said in news release.

Christian may have directed slurs at two young women whom witnesses described as Muslim, one of whom was wearing a hijab, Portland police Sgt. Pete Simpson told CNN.

As two men tried to calm him down, Christian stabbed them and one other man, police said. The two men who died were identified Saturday as Ricky John Best , 53, of Happy Valley, and Taliesin Myrddin Namkai Meche, 23, of Portland.

Best died at the scene, and Meche died at a hospital, police said.

The third man, Micah David-Cole Fletcher, 21, is still at a hospital with serious, but non-life-threatening wounds, police added.

The stabbings happened hours before the start of Ramadan, a monthlong Muslim holy period of prayer, fasting and charity.

He was being held Saturday at the Multnomah County jail without opportunity for bail. His arraignment is set for Tuesday in county court, police said.

Christian could face additional charges once prosecutors present the case to a grand jury, police said.

Police have made contact with the women, who left the scene, and want to interview others who took off.

The victims apparently didn't know Christian and were trying to protect other passengers on the train, police said.

Witnesses said one was stabbed in the neck, CNN affiliate KOIN reported.

Christian appeared to cause a stir at a rally for free speech in Portland last month, shouting at people and at one point blurting a racial epithet, videos from reporter Doug Brown of The Portland Mercury weekly newspaper show.

Christian, wearing a cap and draped in a Revolutionary War-era flag, identifies himself in one of the videos from the rally at Portland's Montavilla Park on April 29.

One video shows him arriving with a baseball bat, which he handed over to one of the police officers who approached him.

The videos show him shouting at people, at one point saying the N-word, as police officers separated him from others.

Saturday, police said detectives are looking at Christian's background, "including the information publicly available about the suspect's extremist ideology."

Following the attack, the Council on American-Islamic Relations called on President Donald Trump to denounce "rising bigotry" and acts of violence against Muslims.

"President Trump must speak out personally against the rising tide of Islamophobia and other forms of bigotry and racism in our nation that he has provoked through his numerous statements, policies and appointments that have negatively impacted minority communities," CAIR National Executive Director Nihad Awad said.

Sen. Jeff Merkley of Oregon took to Twitter to decry the stabbings.

"Terrible tragedy on Portland's Max Train," he posted. "Champions of justice risked and lost their lives. Hate is evil."