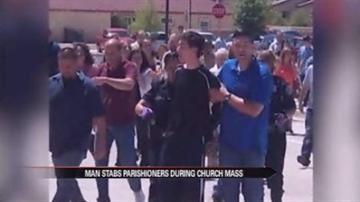 Albuquerque, N.M. -- A man went on a stabbing rampage at an Albuquerque church during the service.

Capener then shouted that the choir was working with the devil and you could hear it in their songs.
The suspect's mother also happens to be a minister at the church.

"He goes, 'I’m coherent, I know what I’m saying and I know what I'm doing.' And I just said, 'Have mercy on your soul,'" said Antoinette DeLeon.

Someone who once worked with the suspect at The Dollar Tree said he confronted and even threatened one of their managers.