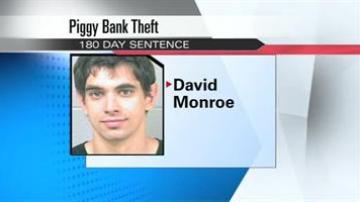 NILES, Mich. -- A man is serving a 180-day jail sentence for stealing $30 from his niece's piggy bank. His sister turned him in to police to get him help.

Amanda Moody says her daughter cried when she found out her Uncle David Monroe took her life savings from her piggy bank.

The girl has forgiven him and is sad he will be in jail for six months.

“I kind of felt like I railroaded him but in the end I feel like I did the right thing because I probably saved his life because he’s gotten into rehab and he’s going to get help," said Moody.

On Father’s Day, Moody made the toughest decision of her life. She turned her brother into police after she noticed he took $30 from her daughter’s piggy bank.

“I was really upset and hurt, kind of felt lost. I just wanted him to get help because I know he would never do anything to hurt my children," said Moody.

Moody says she suspects that her brother David Monroe used the piggy bank money for drugs.

Because of his past drug arrests, she feels like she had to do something.

“If I would have just ignored it and let it go, I could have gotten a phone call that he wasn’t with us anymore or that he had robbed someone else," said Moody.

Moody's daughter knows her uncle is sick. She hopes he gets out of jail soon.

Monroe returned the money to his niece.

In court he cried and told his family he was sorry.