At least 26 people killed in shooting at Texas church 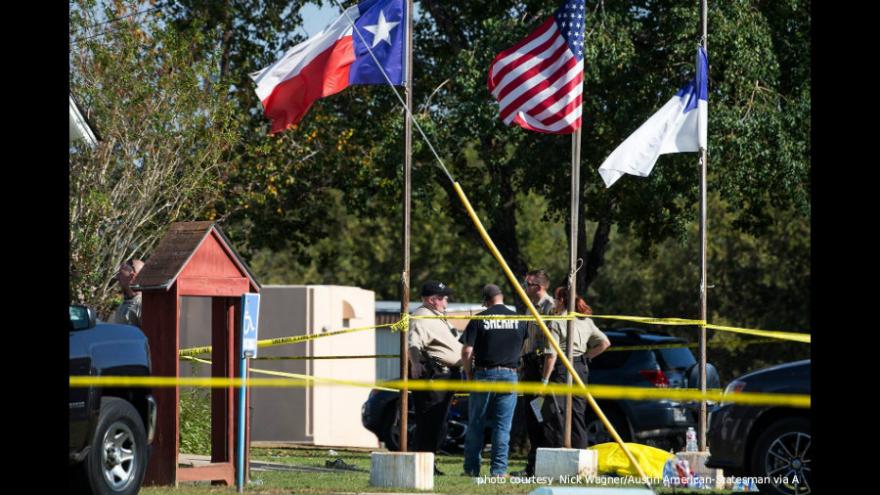 (CNN) -- A gunman killed at least 26 people and injured about 20 others at a Texas church Sunday morning in what Gov. Greg Abbott said was the largest mass shooting in state history.

Around 11:30 a.m. local time, a man dressed in all black exited a vehicle and started firing a rifle outside First Baptist Church in Sutherland Springs, a Texas community of a few hundred people about 30 miles of San Antonio, said Freeman Martin, a regional director with the Texas Department of Public Safety.

The man then entered the church, where services were underway, and continued to fire, Martin said.

A cashier at a gas station across the street from the church told CNN she heard about 20 shots being fired in quick succession.

Eventually, as the gunman was leaving the church, a local resident armed himself with a rifle "and engaged" the shooter, Martin said. Martin didn't say where the resident got the rifle, nor did he provide details about the engagement.

The shooter dropped his gun -- a Ruger AR "assault-type rifle" -- and fled with the resident in pursuit, Martin said.

The shooter drove north into neighboring Guadeloupe County, authorities said. Just inside that county, law enforcement officers found him dead inside his vehicle with a gunshot wound, Martin said.

"At this time, we don't know if it was a self-inflicted gunshot wound or if he was shot by the local resident" who chased him, Martin said.

Of the 26 who have died, 23 were found dead inside the church. Two bodies were found outside. One person died after being transported to a hospital, Martin said.

Among the dead is the 14-year-old daughter of the church's pastor, Frank Pomeroy, according to his wife, Sherri Pomeroy, the girl's mother. The couple were traveling out of state when the shooting occurred.

About 20 people were taken to hospitals with injuries ranging from minor to severe, Martin said. At least four hospitals received patients from the shooting.

Victims ranged in age from 5 to 72 years old, Martin said. It wasn't immediately clear if that included just those who died, or all who were shot.

Authorities didn't immediately release the names of the dead and injured.

The shooter and the investigation

The church attacker was Devin Patrick Kelley, 26, according to two law enforcement sources who have been briefed on the investigation.

Without naming Kelley, Martin described the shooter as a young white male who was dressed in all-black "tactical-type gear" and wearing a ballistic vest. Multiple weapons were inside the vehicle, he said.

Martin said Sunday evening that he couldn't announce any information about a motive in the shooting.

Kelley previously was a member of the US Air Force. He served in logistics readiness at Holloman Air Force Base in New Mexico starting in 2010, according to Air Force spokeswoman Ann Stefanek.

Kelley was charged in military court in 2012 on suspicion of assaulting his spouse and their child, Stefanek said. Kelley received a bad-conduct discharge, confinement for 12 months, and was demoted to E-1, or airman basic, she said.

Kelley purchased the gun he used, a Ruger AR-556 rifle, in April 2016 from an Academy Sports + Outdoors store in San Antonio, a law enforcement official told CNN. He listed an address in Colorado Springs, Colorado, when he bought the rifle, the official said.

When Kelley filled out background-check paperwork at the store, he checked a box to indicate he didn't have any disqualifying criminal history, the official said.

The FBI responded to the scene of the shooting, according to Michelle Lee, spokeswoman for the FBI's San Antonio field office.

President Donald Trump, who was in Japan, condemned the shooting as an "act of evil" and called it "horrific."

"This act of evil occurred as the victims and their families were in their place of sacred worship. We cannot put into words the pain and grief we all feel and we cannot begin to imagine the suffering of those who lost the ones they love," Trump said Monday morning at the top of his previously scheduled remarks to business leaders at the US embassy in Tokyo.

On Twitter, the President said: "May God be w/ the people of Sutherland Springs, Texas. The FBI & law enforcement are on the scene. I am monitoring the situation from Japan."

Abbott, Texas' governor, said the state would mourn the dead and support their families.

"As governor, I ask for every mom and dad at home tonight, that you put your arm around your kid and give your kid a big hug, and let them know how much you love them," Abbott said at a news conference Sunday evening,

US Sen. John Cornyn of Texas called the news "truly heartbreaking" in a tweet Sunday. "Please say a prayer for First Baptist congregation, first responders & the community there," he said.

Abbott and others attended a vigil Sunday night at the Sutherland Springs post office.

"We have never had this happen before," said Debra Morales, a volunteer coordinating relief efforts for victims' family members. "It's all just very upsetting."