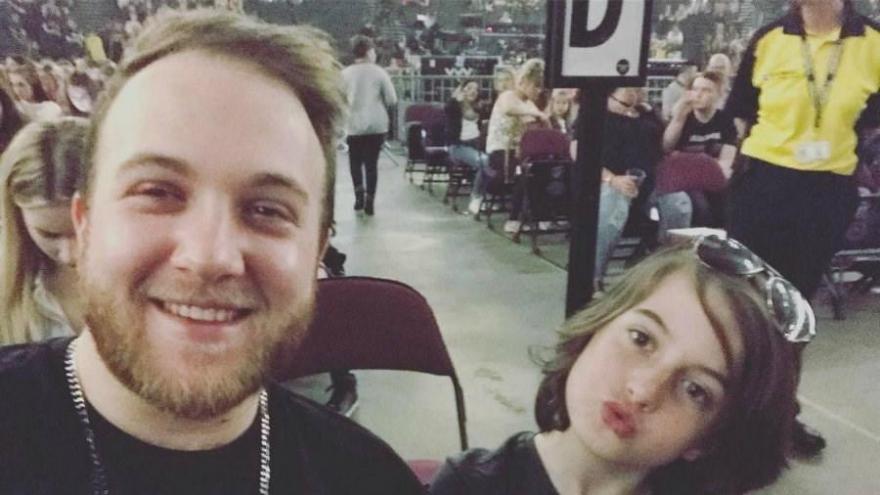 By Joe Sterling and Darran Simon

(CNN) -- Andy James heard an explosion and ran out of the Manchester Arena with his 9 year-old brother in his arms. Screaming Ariana Grande fans streamed out of the building along with him.

"The sound rattled my chest," James said. "I looked up and saw everyone start to scream and run back down the stairs."

It was the first concert that James' 9-year-old brother had ever been to. The tickets were an early birthday present, James said. The concert had just finished when the chaos started.

"The stewards were trying to calm people down but everyone was running in a stampede," recalled James, who made his way out of the arena through another exit. James said he believed he heard a second explosion as they were running out.

His brother's heart was "beating out of his chest," he said.

Other witnesses described the panic that followed. There were bodies and blood in the arena, and smoke filled a corridor and a stairway. Frantic parents called out for their children.

"There was just bodies scattered about everywhere ... it was just chaos," Kiera Dawber said CNN. "There was at least 20 or 30 people on the floor, some that you could see straight off were just, just dead."

Dawber said she saw a man holding his wife. "She wasn't in a very good state," Dawber said.

"The injuries I saw ... it didn't look like the sort of injuries that people get from tripping over people in a hurry," said Joel Goodman, a freelance photographer on the scene.

'Parents shouting out and yelling names'

Ivo Delgado, another witness, recalled hearing one explosion before he saw people running.

"It was more a moment of confusion, but still the bang was really great, really massive," he said. "I saw at least 3 people on the floor injured."

The crowd was made up of mainly young people who had come to see Grande in her first of three scheduled concerts in the United Kingdom, on her European and Latin American tour.

"There was a lot of little girls running out, and parents shouting out and yelling names," Delgado said.

'The roads were bedlam'

Sam Ward, who lives by the arena, said the loud bang he heard "was really sharp, really nothing like I have ever heard in the city center before."

He saw ambulances and sirens.

"Initially after the first wave of sirens and the evacuation, it was filled with cars. The roads were bedlam. People just going through red lights," he said.