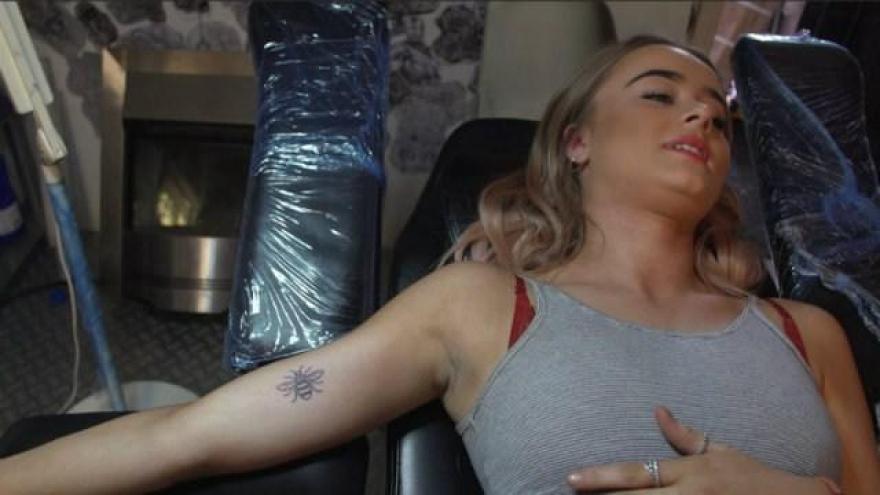 (CNN) -- As Manchester heals after the suicide bombing that claimed 22 lives on Monday, people lay flowers at makeshift memorials around the city.

Some people write messages in chalk on the ground, which disappear in the rain, only to be replaced hours later with new messages of grief and love.

Other people have lined up for hours, choosing to remember the victims by getting something for life -- a tattoo of a bee.

The bee has long been the symbol of Manchester, symbolizing a "hive of activity" in an industrial city. Now it's a symbol of those lost, of strength and of the city's unity.

The Manchester Tattoo Appeal was started by tattoo artist Sam Barber to show solidarity with those affected by the attack and to raise money for them and their families. Those getting tattooed were asked to donate 50 pounds ($64).

Barber said the bee was the "obvious choice as a symbol of strength" for "the city that has always stuck together." And she said people just have to look around Manchester this weekend to see that no one is hiding in fear.

Outside the city, the idea behind the tattoo spread quickly across social media, bringing the bee beyond Manchester and the United Kingdom. Barber said tattoo parlors in places such as Canada, Australia and America also picked up the template and were inking the bee.

Barber's crowdfunding page had already raised nearly 30,000 pounds by Saturday night, and many parlors were raising their own funds to be added to the appeal. Organizers described an "overwhelming response" from studios around the world.

Over the past few days, people have had to be turned away as parlors struggled to keep up with demand. Some parlors were starting to keep their doors open until 2 a.m. to make sure everyone who wants to can be inked.

At Stingin Ink in Bolton, just northwest of Manchester, the parlor's owner, Paul Taylor, was doing the bee tattoos, conveyor-belting people through. He said he'd already tattooed hundreds of people and expected the demand to continue for the next few weeks.

If customers can't afford the 50 pounds, Taylor said he'd charge them less to make sure they can still get the tattoo.

Customers waited in line at Stingin Ink for hours. Yet, despite the long wait and the pain of the tattoo, people chatted and laughed. There was a sense that people were happy to be doing anything they could to help, to come together to remember the victims and send a message of unity.

The Bell family came to get tattoos together and waited in line for three hours. For the daughter, Poppy, it was her first tattoo. Despite being apprehensive about the pain she said the tattoo and donation felt like the right thing to do, and that she wanted to look at her tattoo in 30 years' time and know she did her part to help.

Her sentiment was reflective of the mood in Manchester in the week following the attack. The city has stood bravely, united, and -- perhaps most admirably -- kindly.