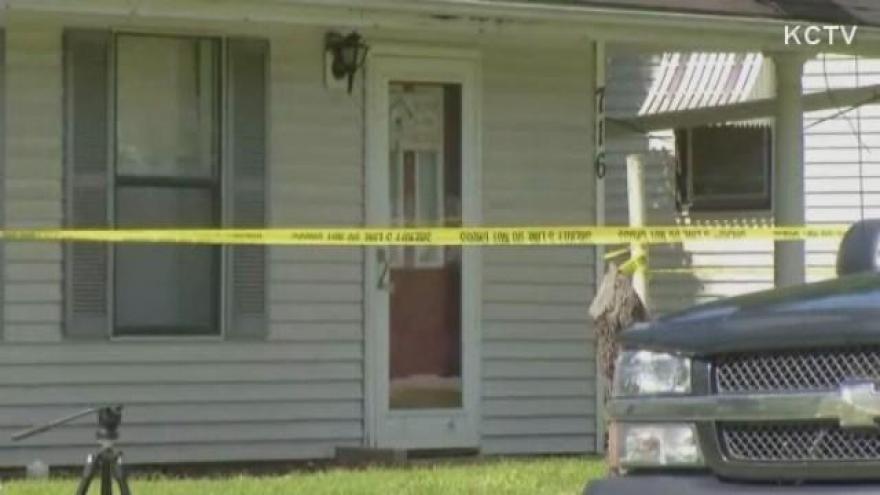 Clinton, MO -- A manhunt is on after authorities said a woman once held captive in a wooden box and her 17-year-old son were found murdered early Thursday.

The suspect is 47-year-old James Barton Horn Jr. He is the former boyfriend of Sandra Sutton and has been charged with kidnapping, armed criminal action and unlawful use of a weapon for keeping her in a wooden box for approximately four months earlier this year in Sedalia.

Horn is not currently in custody and police are searching for him in the Sedalia area. Numerous homes have been surrounded and authorities are working to obtain search warrants.

Sedalia police have blocked off the 800 block of East 15th Street around Horn's home, which is one block from Whittier Alternative High School. Police are looking to use a robot to enter the house.

The school district's superintendent said the high school has been evacuated in response to a request from police. Students and staff have been taken to a safe location.

Police said Horn stole Sandra Sutton's car, which was found at Bothwell Regional Health Center in Sedalia. Video surveillance showed a man that authorities believe was Horn walking away from the car and toward nearby houses.

A Sedalia man told KCTV5 News that his father has been forced by police to stay inside his vehicle. The man was returning home to his residence, which is quite close to Horn's, and police stopped him on the street. He has not been able to move. The man told his son that he heard the sound of what he thought were gunshots.

This all comes after Clinton police were called at 4:21 a.m. to a home located in the 700 block of East Franklin Street.

When officers arrived on the scene, they found 46-year-old Sandra Kay Sutton and her son, Zachary Wade Sutton, shot dead. Zachary Sutton was a junior at Clinton High School.

"Zachary was a wonderful young man and a pleasure to be around. He will be missed dearly at CHS," Principal Bryan Pettengill said.

The Jackson County Medical Examiner's Office will perform the autopsies on the mother and her son.

"While we do not know more details at this time, we are heartbroken over the tragic loss. Our thoughts and prayers are with the friends and family of Zach and his mother," the high school said in a Facebook post.

The school district said the two were slain Wednesday night.

Police said they had been staying at the home with Sandra Sutton's family. The victims were found when family members arrived home from their work early Thursday. The woman was found in a bedroom while her son was found on the stairs. A gun was not found at the scene.

Clinton police believe Horn knew when the relatives Sutton was staying with would be gone and planned his attack around that time. Horn, Sutton and her family members had worked together at a Tyson chicken plant so he knew when the family members would have been at work.

Horn is 5'11" tall and weighs about 175 pounds. He has brown hair and brown eyes. He is known to frequent the Sedalia and Pettis County area. He should be considered armed and dangerous.

Clinton detectives are at the crime scene along with the Missouri State Highway Patrol and the Henry County Sheriff's Department.

According to court documents, Horn sexually assaulted Sandra Sutton while he held her captive. After she broke free, police did not have a rape kit taken so prosecutors did not file a rape charge against Horn.

Sandra Sutton was initially placed in protective custody after she managed to escape and run to a neighbor's home on April 30.

Clinton police Lt. Sonny Lynch said Sandra Sutton was not and never requested protective custody with Horn on the run.

"The fact is we didn't know she was living in our community," Lynch said.

Authorities said Sutton was advised by victim advocates that work with the court system to get a protection order against Horn so police could provide extra patrols and protection as needed. Authorities say she declined to do so, saying Sandra Sutton felt that she was safe with family members.

"She could have gotten an order of protection, but she didn't," Lynch said. "Did that lead to her death? I really can't say with any certainty that it did. I really don't know."

Horn has a lengthy history of kidnapping, torturing and raping the women that he has been involved with. Federal prosecutors in North Carolina said that Horn was a sexual sadist who should be institutionalized after he finished a prison sentence, but a judge found that Horn had changed his ways and ordered his release.

U.S. Attorney Thomas G. Walker, who is based in Raleigh and whose office requested Horn be held after serving his prison sentenced, declined comment Thursday afternoon.

Sutton's family had said that she was not aware of Horn's criminal background when she was dating him.

Authorities said after the couple had a bad falling out in January, Horn attacked Sandra Sutton and forced her into a wooden box that was 100'' long, 48'' wide and 52'' tall. She was sexually assaulted and routinely locked in the box, but was given food and water, authorities said.

The wooden box was made out of plywood and lumber. It had soundproof insulation on top of it. There was a "small hole" for air, according to court documents. Inside were sleeping bags, reading materials, flash lights and a small bucket containing the woman's waste.

If you or anyone that you know has any information about the crime or the location of Horn, please call the Clinton Police Department immediately at 660-885-2679.