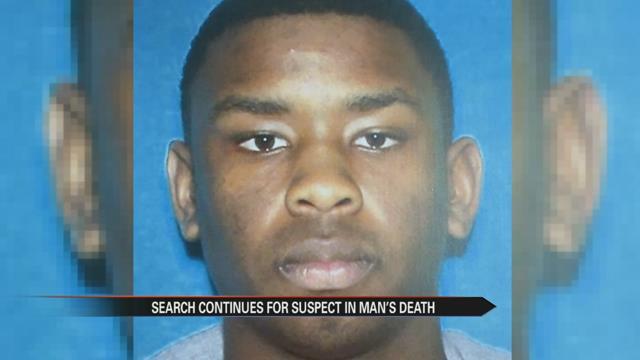 An active manhunt is underway for a 21-year-old South Bend resident police say is connected to the death of a man found inside a car that crashed into an apartment Sunday morning.

Police were called to the 2400 block of Flint Court inside the Indian Springs apartment complex just after 1 a.m. Sunday morning for a report of a car into a building and possible shots fired.

“When the officers got there, they did, in fact, find a car into a building,” Corbett said. “They found [an] individual, male, black dead behind the wheel; appeared to be the victim of a shooting. That’s how we’re investigating this now, as a homicide.”

Metro Homicide arrived on the scene early Sunday morning, attempting to piece together what happened, while trying to locate Cotton.

“We’ve talked to family members,” Corbett said. “I’ve also reached out on a phone call to him…we have not caught up to him yet. So, he knows he’s wanted.”

Police have not confirmed the victim’s identity, but posts on Facebook by family and friends indicate Gary Williams was killed in the incident.

The motive of the crime is not yet known, but Metro Homicide said Williams was in his car facing the apartment building before things escalated.

“There was a bit of a confrontation with another individual – to what depth, I won’t go into that – he put his vehicle into drive and pulled forward,” Corbett said.

Police said the family living inside the apartment narrowly escaped a tragedy of their own.

“They had been up watching TV and they’d gone up to bed about an hour to an hour and a half previous to the car going through their front room,” Corbett said. “They would’ve been dead.”

The apartment was boarded up and the scene was cleared Sunday afternoon, but the manhunt for Cotton continues.

“The biggest thing that we have to do is get him off the street,” Corbett said.

Police are urging anyone who may see Nelson Cotton to call police and not confront him.

Police also said there was a second person inside the car that crashed into the apartment, but that person is okay and cooperating with authorities.

Neighbors told ABC57 off camera that the area is normally very quiet, and that this crime is both surprising and frightening.