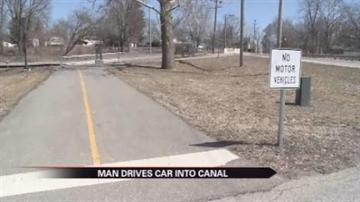 GOSHEN, Ind. – A man’s car was fished out of the Millrace at Shanklin Park Thursday morning after he allegedly drove on the Millrace footpath and then into the Millrace.

A caller to 911 told police that a vehicle was driving on the Millrace footpath near the Douglas Street foot bridge.

The caller then stated that the car went into the Millrace.

When Goshen Police arrived, they found a vehicle in the water and the car’s driver on the west bank of the water.

The driver, 63-year-old Marc Peterson, was taken to IU Health Goshen for treatment of minor injuries.

A tow truck with the assistance of a diver with the Goshen Police removed the vehicle from the water.

Upon his release from the hospital, police say he will be arrested for operating while intoxicated and will be taken to the Elkhart County Jail.