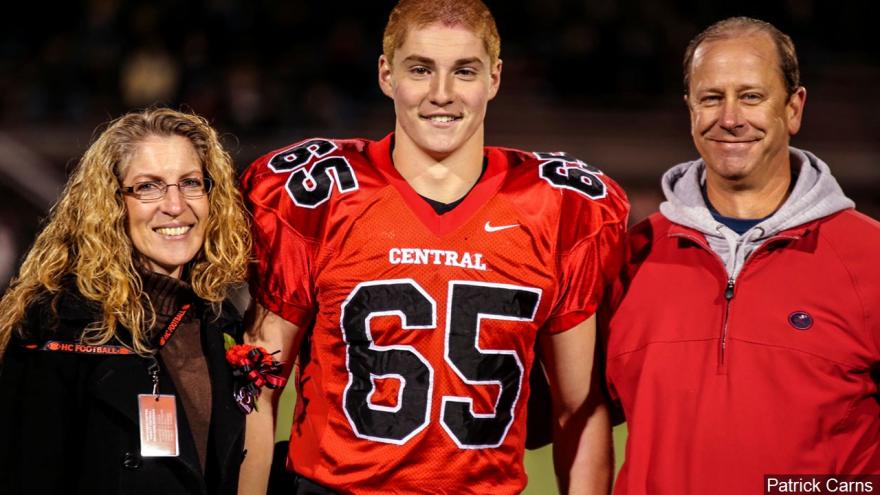 All aggravated and simple assault charges, plus charges stemming from a previous 2016 rush period also were tossed out by Magisterial District Judge Allen Sinclair of Centre County.

Piazza, 19, died following his first night pledging Beta Theta Pi, a fraternity that was supposed to be alcohol-free as a result of a suspension eight years ago. Surveillance footage played in court shows Piazza falling repeatedly, including down a flight of stairs, following the event that involving heavy drinking.

"This tragic death was simply not foreseeable. People drink to excess at college parties," defense attorney Michael Engle had argued to the judge before the ruling.

The seven-day hearing raised questions about oversight at fraternities at Penn State. The university, which claims it was not responsible for enforcing the alcohol prohibition, has permanently banned the fraternity from operating on campus.

An attorney for Piazza's parents said after Friday's hearing that the remaining charges against 14 fraternity members are serious and could result in jail time, if the defendants are found guilty.

Piazza's parents cried after Friday's hearing, attorney Tom Kline said, though not because the most serious charges were tossed.

"They didn't cry on the dismissal of higher charges," he said. "They cried tears for their son. ... This case is about when is it going to stop in America -- the craziness, the permissiveness, the excessiveness, the debauchery, the depravity that goes on in a fraternity house like we saw on a video tape."

Jim and Evelyn Piazza told CNN they relied on their son's strength to get through 56 hours hours of testimony.

"We had to relive every moment of our son's last day and, you know, it was pretty difficult," Jim Piazza said. "There's going to be a lot of bumps in the road, good days and bad days, and we need the strength that he gives us."

Evelyn Piazza told CNN, "It's just awful to think about, and maybe some day when these individuals have kids of their own they will understand the kind of love you have for your child and the kind of loss you experience when they are cruelly taken from you for no good reason."

Piazza's death led to one of the largest criminal indictments against a fraternity and its members in recent history. More than 1,000 counts were levied against 18 Beta Theta Pi members, including eight who were charged with involuntary manslaughter and aggravated assault.

After Friday's ruling, four fraternity brothers no longer face charges. Ryan McCann, Lucas Rockwell and Braxton Becker had been charged with tampering with evidence. Joseph Ems is no longer facing a charge of reckless endangerment.

All of the felony charges are dismissed against the remaining defendants.

"As we have said from the outset of the case, that as to the most serious charges, the aggravated assault, the involuntary manslaughter and the simple assault those charges were absolutely, unequivocally unfounded, unwarranted, and injustice -- unjustified. And it's now -- we have been proven absolutely true," said defense attorney Theodore Simon. "Not every tragedy should result in serious criminal charges."

However, several fraternity members were bound over for trial on charges including hazing, furnishing alcohol, reckless endangerment, and tampering with evidence, and the Piazza family told CNN that those charges are at the heart of their quest for justice.

"Our view all along has been these guys are responsible for the death of our son, and we're looking forward to see where that takes us in the trial, and I don't think the story is finished being told yet," Jim Piazza said.

Two fraternity brothers who were charged with evidence-tampering -- Ryan Foster and Ed Gilmartin -- waived their right to this hearing, so their charges will proceed to trial.

District Attorney Stacy Parks Miller said after the hearing that she was "certainly planning to refile" the involuntary manslaughter charges, calling that decision "a no-brainer." Her office also may refile other charges that were dropped, she said.

Parks Miller said she believes the grand jury found sufficient probable cause and the judge erred in his decision.

"There were some errors of law we believe," she said.

But the defense attorneys said they are cautiously optimistic moving forward.

"My position all along was: These charges were excessive," said attorney Leonard Ambrose. "We went through seven days of hearings, 75 hours of testimony and argument, and the court's decision is correct. This shouldn't have been filed to start with."