Manti Te'o picks up two honors for play on the field 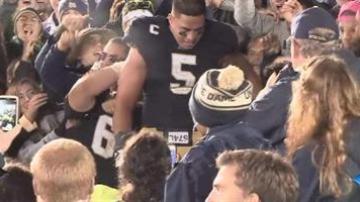 NOTRE DAME, Ind. -- Manti Te'o's performance on the field against Michigan earned him not one, but two honors this week.

The Football Bowl Subdivision (FBS) named Te'o as defensive player of the week. Te'o had two interceptions and eight tackles, including one for a loss in the game against Michigan.

The senior is the first Irish player to have multiple interceptions against the Wolverines.

In addition to the FBS selection, Te'o was also named the Lott Impact Player of the Week for the second week in a row.

It is awarded annually to the top defensive player in college football.