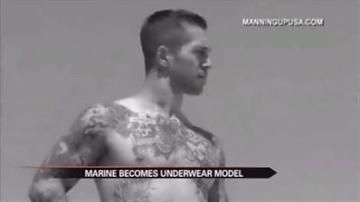 A marine who fought in Afghanistan is now making money as an underwear model.

Alex Minsky lost his leg when a roadside bomb nearly killed him in Afghanistan.

He spent 47 days in a coma, suffered traumatic brain injuries, and severe burns over most of his body but during his recovery, his unique physique was discovered at the gym.

Alex said when he was first approached with the idea he did not believe them.

Minsky suffered from depression and alcoholism but he battled back and started working out.