Marines return to South Bend after 7 months in Afghanistan 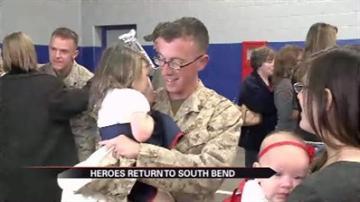 The Marines are from Engineering Company B, the 6th Engineer Support Battalion.

For the last 7 months these Marines were in combat zones in Afghanistan.

Their families are just happy to have them home.

Having a loved one in a combat area is stressful as it is, but more so for some.

Angelica Daugherty was pregnant when her husband deployed.

"It was difficult, it was hard, it was emotional but I made it through,” said Daugherty.

She wasn't the only one. Several other wives were pregnant when their husbands were called to fight.

They banded together for support.

"It was really helpful sometimes because they are doing the exact same thing,” said Tori Torres.

Even though they were thousands of miles away, the fathers were still able to be there for that special moment via a webcam and Skype.

"He was in the hospital room, he saw the entire thing. He was there the whole time,” said Kaytee Pohl.

Seeing it on a computer screen just isn't the same as being there.

"Full of emotions, pretty much speechless, I mean, it's the first time I'm seeing my daughter,” said Corporal Devin Daugherty.

Their commanding officer Lieutenant Thomas Tinsley says his Marines did a great job handling the stress and seeing the mission through.

"My Marines did amazing things. They blew my mind with every opportunity and they were outstanding,” said Tinsley.

There was a little bit of mechanical trouble with one of the busses bringing the marines back to South Bend. It caused about a two hour delay in their return.