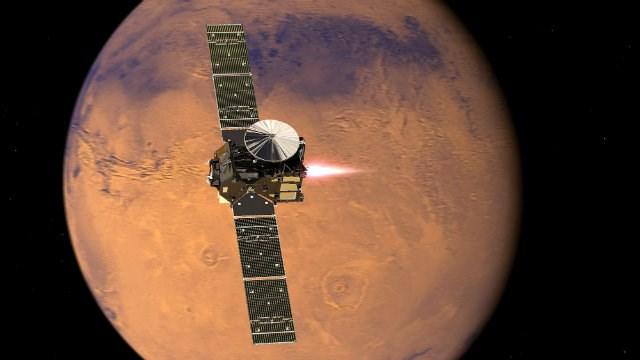 (CNN) -- Scientists with the European Space Agency are anxiously waiting for news from the Schiaparelli spacecraft, which was expected to land on Mars on Wednesday.

After a high-speed, fiery descent through the Martian atmosphere, scientists at mission control in Darmstadt, Germany, did not get a signal back indicating the 1,272 pound (577 kilogram) probe safely made it to the surface.

They expect to have an update on Thursday after analyzing data sent down by other spacecraft in orbit around Mars.

The probe was equipped with a heat shield to protect it from intense heat as it plunged toward the Mars' surface at more than 1,000 mph. A parachute was due to deploy at 150 mph and then for the last 30 seconds nine thrusters should have fired to ease it down. The European Space Agency, or ESA, says a crumple zone similar to those in cars was designed to help cushion the landing.

Even if it successfully made it to the surface, the probe was only expected to operate for three to 10 days before its batteries ran out.

The mission, a joint venture between ESA's ExoMars program and the Russian state corporation Roscosmos, was primarily designed to test ESA's ability to land on Mars. The agency has a bigger mission, the ExoMars rover project, slated for 2020.

The ghost of Beagle 2

ESA is hoping for a better outcome than the disappointment of 2003 when contact was lost with its Beagle 2 probe. Images from NASA's Mars Reconnaissance Orbiter showed last year that the craft had landed on the surface but that its solar panels failed to deploy properly.

Ahead of Wednesday's scheduled landing, ESA senior science adviser Mark McCaughrean told CNN that Mars was a particularly tough challenge, but they were keen to get it right. "We're back to prove we have the ability," he said.

Part of Schiaparelli's task is to measure electric fields. It is hoped that this will reveal more about how dust storms spread across Mars.

It is thought that dust particles bumping into each other create a static charge that causes more dust to lift, McCaughrean explained.

The lander was named after Italian astronomer Giovanni Schiapparelli, whose description of "canali" on Mars prompted debate about whether there was life on the planet. Modern observations have shown that these channels never existed, but the search for life goes on.

Schiaparelli's companion craft, an orbiter with a much longer mission, successfully made it to orbit on Wednesday. The Trace Gas Orbiter will investigate the source of methane on Mars, which could be a sign of life or geological processes.

The orbiter adds to a fleet of spacecraft that are looking for signs of life on our neighboring planet.

The presence of methane is a signature of life on Earth, so the orbiting spacecraft will be trying to detect it and determine where it is coming from.

Adam Stevens, a researcher at the University of Edinburgh and the UK Centre for Astrobiology said methane may be produced by other processes but the mission will help "rule out some possibilities ... to tease out what is going on."

The Trace Gas Oribiter is expected to operate until 2020.

When will humans get to Mars?

While ESA tries to land on Mars, the United States is moving ahead with plans to send humans to the planet.

Writing for CNN, US President Barack Obama spoke of America's aim to put humans on Mars in the 2030s with the eventual aim of staying for an "extended time."

Two NASA rovers continue to operate on the Martian surface -- Curiosity, which arrived in 2012, and Opportunity, which has been returning images for more than 12 years. Spirit's mission ended in 2011.

Several orbiters are learning more about Mars, and private companies have ambitious plans to launch missions there, including Space X and Mars One.