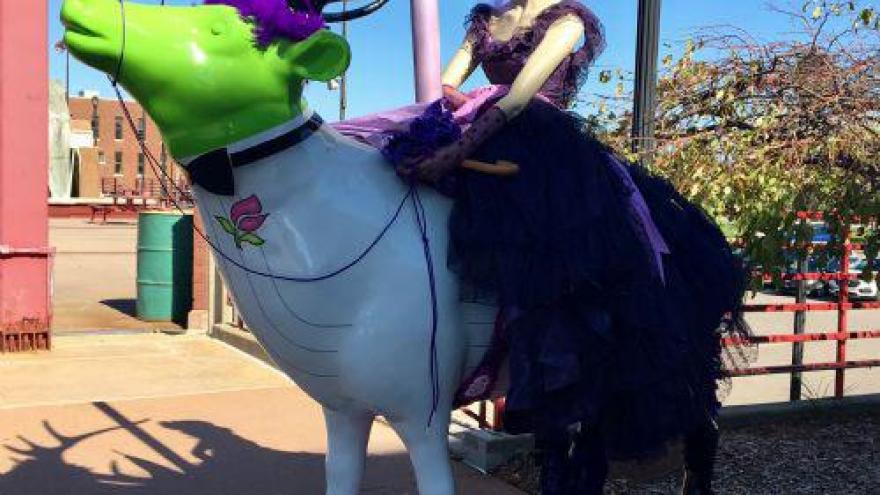 The YWCA and CAPS are asking the person who stole Mary Poppins to please return her. She had been on display as part of the Purple Elk Challenge to raise money for the organizations.

The Mary Poppins mannequin was sitting on top of one of the elks placed in Civic Plaza outside the Lerner Theater.

The display was part of the Purple Elk Challenge to raise both awareness and funds for programs to prevent child abuse and the YWCA's Safe Haven shelter for victims of domestic violence in Elkhart.

“I’m saddened that someone would steal something meant to help women and children in Elkhart County,” said YWCA President & CEO Linda Baechle. “It is so disappointing,” added Baechle.

Teams who decorated the statues, called herds, are now raising donations online to win the title of “Best Dressed Elk.”

Community volunteers Tammie Carr and Mary Jo Satorius were part of the herd who created the Mary Poppins elk.

“It’s heartbreaking that someone would do this in the city with a heart," said Carr.

“Turning the Elks purple is about awareness in our community. Now more than ever, this is present in our community and we all need to be a part of the solution," said Sartorius.

Mary's disappearance was discovered on Friday.

“It’s disappointing because you would really like for people in the community to be aware. Domestic violence is taking a toll in our community. We’ve had a death in Elkhart and a death in South Bend over the last few months," said Baechl.

A police report has been filed and anyone with knowledge of the theft is asked to contact police.

While the investigation takes place the fundraiser continues. You can vote for Mary Poppins or any of the other purple elk by visiting ywca.org/purple elk.