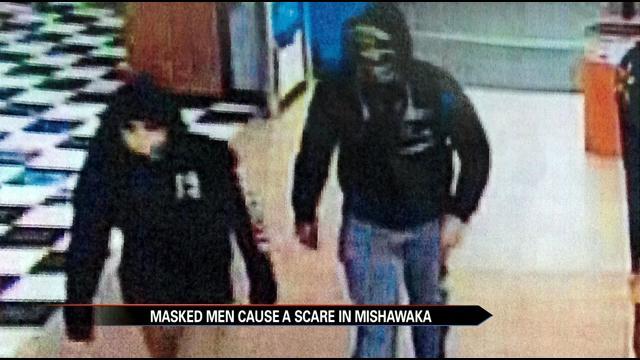 Halloween has been over for nearly a month, but police are searching for two masked men who created a scare inside the Mishawaka Wal-Mart.

The men walked around the store wearing masks that resemble those from the horror film “The Purge.”

Officers think they were trying to scare Wal-Mart shoppers, but their actual intent is still in question, because no one in the store said they saw any sort of weapon.

A shopper made an attempt to confront the men, but the masked men threw a note back to the shopper reading, “Don't be a hero.”

Lieutenant Tim Williams of the Mishawaka Police Department says it is never a good idea to approach suspicious people.

“We do not want you approaching people like that. We want you to call the police," said Williams.

Upon leaving Wal-Mart, the men were not wearing their masks and left in two separate vehicles -  a Chevy Trailblazer and a Chevy Malibu.