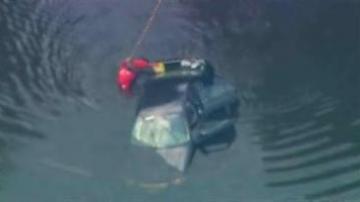 NATICK, Mass. -- A Massachusetts woman went for a dip in a local river while she was driving.

Police said as she was coming from the hospital, she found herself in the deep water while running from the cops.

They are not sure why she was trying to ditch the officers, but she was rescued out of the water.

Police said charges are not likely to come from the incident and they wouldn't say if it was accidental or intentional.