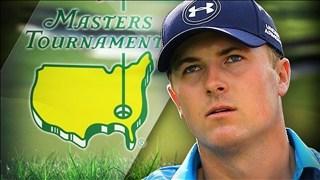 He might not yet be the next Tiger Woods, but Jordan Spieth served notice to the golfing world with a record-breaking first major victory at the Masters on Sunday.

The 21-year-old became the second-youngest player to win at Augusta, behind only Woods' 1997 effort, and just the fifth man to lead the prestigious tournament from start to finish.

The American went into Sunday's final round with a four-shot lead, extended that by one after his opening nine holes, and at the next beat Phil Mickelson's Masters record of 26 birdies for the week.

Unlike last year, where he squandered the lead just before the nine-hole turn on the last day, this time he was unstoppable.

Spieth's 28th birdie, at the 15th hole, made him the first player to reach 19 under par at the Masters -- eclipsing Woods' 1997 winning total. A bogey at the last meant he ended tied with the 14-time major champion's mark.

The Texan couldn't match Woods' 12-shot winning margin of 18 years ago, but finished four ahead of second-placed Justin Rose and Mickelson -- both of whom are already major winners.

Spieth's halfway total of 14 under par on Friday broke the 39-year-old record set by Ray Floyd in 1976, and his 54-hole effort of 16 under was also a new Augusta best.

Woods, whose last of four green jackets at Augusta was won a decade ago, tied for 17th on six under after closing with 73.

Still rusty on his return to action after two months out trying to revive his ailing game, Woods was again wayward from the tee -- and indeed hurt his wrist playing out of the pine trees -- but still managed an eagle at the par-five 13th hole.

The 39-year-old, who has dropped out of the top 100 in the world rankings for the first time since the late '90s, ended his week with a bogey.

His playing partner Rory McIlroy closed with a birdie to shoot a flawless 66 to finish fourth on 12 under -- his best Masters finish.

The world No. 1, who blew a four-shot lead on the final day in 2011, is still seeking the one major title to elude him.

Rose, the 2013 U.S. Open champion, could not get closer than within three of Spieth on Sunday and ended up signing for the same closing score of 70.

Mickelson, whose third Augusta success was back in 2010, raised his hopes when he eagled the 15th but could only manage pars at his last three holes and carded 69.

Japan's Hideki Matsuyama matched McIlroy's day's best round of 66 to be fifth on 11 under, one ahead of Englishmen Paul Casey (68) and Ian Poulter (67) and American Dustin Johnson (69).